Experience Turkey Tours to discover one of the wonders of the Middle East. Turkey is a unique country met at the crossroads of regions and religions that shape it into a must-visit destination for curious travelers. Discover the beautiful mosques, the lost cities hidden beneath ruins, the natural sights, and some of the more vibrant colors everywhere you look. Turkey is an experience like no other, and Turkey Tours is your gateway to the perfect trip. With tour operator volume buys plus our low everyday prices you can save up to 40% versus assembling the same itinerary on your own! Book your Turkey tour today with AffordableTours.com, your discounted tour headquarters. View Turkey Tour Deals and Discounts 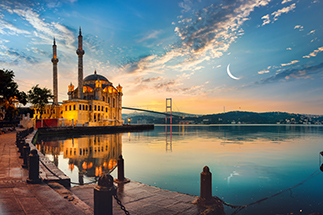 Turkey Tours Things To Do

The best time to visit Turkey is in late spring and early fall. Turkey is a unique city stretched across two continents – Europe and Asia. It's a popular travel destination in all seasons from tourists from both continents.

Reviews for Turkey Tours and Vacations

Amazing trip! Fast paced, energetic and informative. Guide and driver were extremely respectful and professional and ensured everyone was safe and comfortable. Highly recommend for those who love history. Inability to walk will negatively limit your experience. Bring a good camera, walking shoes and a smile!

Our tour guide Taner was extremely knowledgeable, well organized, helpful and fun! The accommodations and food were lovely. We found a whole experience to be exciting and an excellent tour on the whole