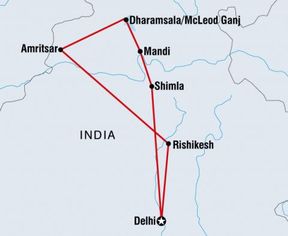 Take a tour of India and be introduced to the Mountains and Mystics of this incredible country. This is a journey of the body, mind and spirit as you travel through the foothills of the world's highest mountains - the Himalayas. These mystical lands look and feel very different from the rest of India - from the food and clothes to the crisp, clean mountain air and spiritual soul of the locals. Discover it all on a 13-day enlightening adventure, and be enchanted by a land in perfect balance between physical and spiritual worlds.

Day 1: Delhi
Welcome to India’s capital, Delhi! Join your group and guide for a welcome meeting at 6 pm. If you happen to arrive into Delhi early, there are plenty of things to see and do. Perhaps pay a visit to the 12th-century Qutub Minar or the World Heritage-listed Humayun's Tomb. As the former residence of royal families and British soldiers, the Red Fort plays a vital part in Delhi’s history and is a must-see. Sampling spicy street food or trying your hand at haggling in the city’s bazaars are other great introductions to India.

Day 2: Delhi
This morning, join the group for a walking tour around Old Delhi, which has been an important city in India for over 2000 years. Climb aboard a traditional cycle rickshaw and be driven through the colour and chaos of Delhi’s traffic. In the afternoon, learn about the Sikh religion at the Sheeshganj Gurudwara (Sikh Temple) and visit the Jama Masjid – Delhi's oldest and India’s largest mosque.

Day 3: Shimla
Depart Delhi by train for the 4-5-hour journey across the state of Punjab to Chandigarh. From Chandigarh, you’ll travel by private vehicle to Shimla. On arrival, get your bearings and explore the town's faded colonial charm on an orientation walk with your group leader.

Day 4: Shimla
Wake up early this morning to board the World Heritage-listed 'toy train' for a two-hour scenic journey offering views of quaint villages and gorgeous mountain passes. Afterwards, head out and explore Mall Road – Shimla's most popular shopping stretch. A nearby viewpoint also offers fantastic views of the Himalayas. Visit the Viceregal Lodge to witness where the partition agreement that separated India from Pakistan and Bangladesh was drawn up. If you like, join the hordes of monkeys milling about Jakhu Temple or stock up on souvenirs and specialty wooden crafts at Lakkar Bazaar. Set among rolling hills, Shimla also offers an array of nature walks that range from gentle to challenging. In the evening, you might like to enjoy an optional trip to the cinema and bop along to a Bollywood blockbuster.

Day 5: Mandi
Travel by jeep to the small town of Mandi. Situated on the Beas River, Mandi has a rich cultural heritage of both historical and theological significance. Once part of the salt route to Tibet, today it's the gateway to the Kullu Valley. Head into town for a walk and explore a huge sunken shopping centre – the only one like it in India and the focal point of entertainment in Mandi. You can also spend time at the bathing ghats along the river or hike to hilltop temples just outside of town. In the evening, enjoy an included dinner and stay in the simply restored former palace of the Raja of Mandi.

Day 6: Dharamsala (McLeod Ganj)
Today’s journey through the mountains today is an adventure in itself. Travel by private vehicle for the 6-hour drive along bumpy, winding roads to Dharamsala, also known as McLeod Ganj. Strung with prayer flags and busy with robed monks strolling between monasteries, this hilltop retreat is home to the Dalai Lama and the Tibetan government in exile. Spend the afternoon wandering the peaceful streets, which are set to the backdrop of the Himalayas. There’s a lot to gain here from learning about the many facets of Tibetan Buddhism.

Day 7: Dharamsala (McLeod Ganj)
Today, visit the fascinating Norbulingka Institute, developed to train Tibetan refugees in skills needed to preserve the traditional arts and crafts of Tibet. Its grounds feature a beautiful temple and several workshops where you can see woodcarving, painting and needlework in action. Then make your way to the Tsuglag Khang complex to see the Dalai Lama’s temple. You may also like to visit the Losel Doll Museum, which is a great way to learn about the daily lives and customs of people all over Tibet.

Day 8: Amritsar
Today, travel down the mountains to Amritsar, situated in the heart of the fertile plain known as India's ‘breadbasket’ and the centre of Sikhism in India. Tour the sights and wander through the rambling streets and bazaars of the Old City by foot. Explore the Golden Temple (Harmandir Sahib), which sits in the middle of a sacred lake. Listen to the soothing sounds of the devout chanting verses from the Sikh holy book – the Guru Granth Sahib.

Day 9: Amritsar – Overnight train
Visit Jallianwala Bagh – the site of the tragic 1919 massacre that played a vital role in India's independence. Then head out to the India–Pakistan border to witness the pomp and circumstance of the daily flag ceremony – a military practice that the security forces of India and Pakistan have followed since 1959. Tonight, take an overnight sleeper train from Amritsar to Haridwar.

Day 10: Rishikesh
After pulling into Haridwar in the morning, there’s a 1-hour drive to Rishikesh. Check in to your hotel before going on an orientation walk with your leader. Pay a visit to the faded but mural-lined walls of Chaurasi Kutia – the ashram made internationally famous (long with Rishikesh by association) when the Beatles visited in the 1960s. Explore the crumbling beauty of the former ashram, now covered in graffiti related to the band and counterculture. In the evening, take a stroll along the holy Ganges River as temple bells ring and the nightly fire ritual of Ganga Aarti begins.

Day 11: Rishikesh – River Ganges
The morning is yours to roam around Rishikesh. Perhaps tuck into a masala dosa for breakfast before walking or riding it off on one of the trails along the Ganges. Aptly named the 'Yoga Capital of the World', Rishikesh is a great place to relax and seek a little enlightenment with your own yoga class, if you’d like. For something more adventurous, there is the option to white-water raft down the Ganges. In the afternoon, reunite with your group for a walk through the jungle nearby. Tonight, experience sleeping under the stars just outside of Rishikesh; you’ll be staying in a fixed campsite with twin-shared tents and western-style toilets.

Day 12: Delhi
Bid farewell to Rishikesh and take the train back to Delhi (approximately 7-9 hours). The train arrives back into Delhi around 11 pm from where you’ll be transferred to your hotel on arrival.

Day 13: Delhi
There are no activities planned for today, so you’re free to depart the accommodation at any time. Don't forget to check out the great range of Urban Adventures if you have extra time in Delhi, including Culture Vulture Delhi – visiting the chaotic lanes, historic sites and streetside food stalls of the capital. Head to urbanadventures.com/destination/delhi-tours for more information. If you would like to spend some more time in Delhi, we’ll be happy to organise additional accommodation (subject to availability).