Malaysia is an incredible tourist destination located in Southeast Asia. On your visit, you'll get to experience firsthand the influences of Chinese, Indian, Malay, and European cultural influences. There are tons of beaches to relax on, rainforests to explore, and shopping districts to discover. You're bound to have the time of your life on your group tour! With tour operator volume buys plus our low everyday prices you can save up to 40% versus assembling the same itinerary on your own! Book your Malaysia tour today with AffordableTours.com, your discounted tour headquarters. View Malaysia Tour Deals and Discounts 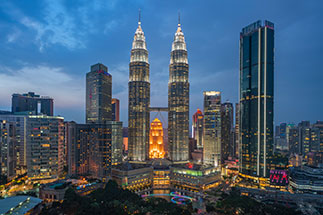 Malaysia Tours Things To Do

Overall, Malaysia is good to visit at any time of year; it truly just depends on which side of the country you want to visit. If you're traveling to the East coast, visit from March through October, and if you're visiting the West, November through February is your best bet.

Malaysia's weather is pretty consistent all year long, so there isn't a huge distinction between the seasons. Expect heat and humidity no matter when you visit! The one thing that does vary, however, is rain. Monsoon season arrives around November or December and brings tons of rain until mid-February. It's not usually recommended to visit the East coast of Malaysia during this time.

However, if you plan to visit Malaysia's West Coast, you'll be fine traveling during these months. The West Coast doesn't have its rainy season until April through October, and it's typically much milder and not as wet as the East coast's rainy season.

Reviews for Malaysia Tours and Vacations

Our CEO Ronald was extremely knowledgeable about the locales and animals. He reviewed each days schedule and made us feel as if we were all friends, not individual travelers.

We enjoyed this trip tremendously, but one needs more time for Singapore!