Russia tours typically focus on two very important cities: Moscow, Russia's capital and home of the Kremlin, and St. Petersburg, the cultural capital and the Window to the West. St. Petersburg is styled after European cities and Moscow features the colorful onion-shaped domes of St. Basil's Cathedral in the Red Square. Make sure to visit the Hermitage Museum, which houses one of the largest and most prestigious art collections in the world. With tour operator volume buys plus our low everyday prices you can save up to 40% versus assembling the same itinerary on your own! Book your Russia tour today with AffordableTours.com, your discounted tour headquarters. 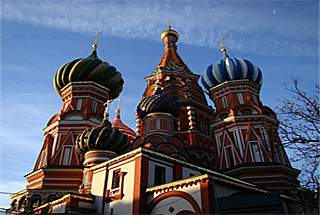 Russia Tours When To Visit

Russia tours are prepackaged trips with a set itinerary and dedicated tour manager. Many people who want to take a Russia vacation want to avoid all the planning and logistics involved in a big week or two week foreign trip abroad and are looking to save money by doing it all in a package instead of piecing things together at full price. The trip is led by a tour director who will take care of all the services from beginning to the end of your vacation. Your tour director connects you with local tour guides who will have a lot of knowledge on the specific cities you explore. Typically, hotels, transportation throughout your trip, some meals and sightseeing are arranged and included with the price of your  Russia tour.

What's Included on a Russia Tour?

Generally,  a Russia tour will include as many services as possible, giving you less to worry about. Usually included on your Russia tour are: transportation (getting from place to place while on tour), accommodations, most meals, and the services of a dedicated tour director. As per the itinerary, certain sightseeing opportunities are also included: tickets to special VIP access to the most famous landmarks, skip the lines, and when available, access to a personal local guide for expert commentary.

The best Russia tour is the one that fits your budget and schedule! The most popular tour operators are Globus, Trafalgar, Insight Vacations, Cosmos, Costsaver, CIE Tours, Intrepid, Tauck and others. You can't go wrong with any  Russia tour. Please speak with one of our travel consultants to find the best tour for you!

How Much Do Russia Tours Cost?

You can book an affordable Russia tour starting from under $99 per day per person. Besides our award winning customer service, the best part about booking with AffordableTours.com is you will always receive a discount on your Russia tour. We are committed to providing you with the lowest prices on all top tour operators.  No one beats our prices on all of our Russia tours!

When I booked it I asked for an upgrade and was told the ship was completely booked, and it was not. I asked for 2 beds and eventhough I accepted only one it was very unconfortable as one of the guests was close the the wall and was difficult lo get out of bed. The rest was OK

It was a wonderful trip, our first on Insight. The Travel Director and Local Agents were bright and extremely well prepared. We also enjoyed the company of our fellow travelers. Also, our hotel in Moscow was amazing!