Long a mystery to people from the West, Tibet is an autonomous region that covers the Tibetan Plateau, and is known as the traditional homeland of the Tibetan people. Tibet is also the highest region in the world, with an average elevation of 16,000 feet. The area is also home to the world's highest mountain, Mount Everest, which rises 29,029 feet high. The peak is located in the Himalaya Mountain Range. A province in southwest China, Tibet has a population of 7 million Tibetans. Some of the Tibetan people live in the neighboring Chinese provinces of Gansu, Sichuan, Yunnan, and Qinghai. Some tours to Tibet may include travel to the Yunnan Province, or stops in Shanghai or Shangri-la. With tour operator volume buys plus our low everyday prices you can save up to 40% versus assembling the same itinerary on your own! Book your Tibet tour today with AffordableTours.com, your discounted tour headquarters. View Tibet Tour Deals and Discounts 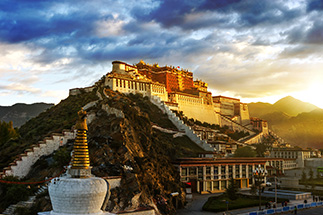 Tibet Tours Things To Do

If you opt for one of the featured Tibet tours online, you should plan your trip from May to October. You will not be able to make any Tibet tour plans in January and February, as Tibet is closed to tourists for New Year during these two months.

If you go during the high season, from May to October, the high altitude is more oxygen-rich and the temperatures are milder. However, you still will need to bring layers of clothing, plus a sweater, in the summertime, as temperatures take a significant drop during the nighttime hours.

If you plan to visit Mt. Everest or climb the mountain, the best time to plan a trip is during April or May, or up to the middle part of June. During these months, the summit of the mountain can be clearly seen. If you are a mountain climber, the climbing window falls between April and May if your goal is to climb to the top.

Reviews for Tibet Tours and Vacations

Riley has been our travel agent for over six years. He is very professional, helpful, knowledgeable and has been the main reason why we continue to use affordable tours,

One of the best tours we ever took. Our guide Sam was excellent; everything ran smoothly and was above our expectations. The city guides were very knowledgeable. Would highly recommend.