We know that travelers want to experience Germany's vibrant cities, amazing historic architecture and enchanting medieval villages. From romantic castles, longstanding palaces and abbeys to the Black Forest and glistening skyscrapers, there are plenty of opportunities to see it all in Germany. Frankfurt is the international hub of Germany and many tours begin and end in Frankfurt. Munich is a quintessential Bavarian city, where the city's most famous beer garden, the Hofbrauhuas and the picturesque New Town Hall with its working carillon (Glockenspiel) is located. Neuschwanstein Castle is a popular fair-tale estate that inspired the design of Disney's Cinderella castles. In Berlin, see remnants of the Berlin Wall and the fascinating Checkpoint Charlie museum. Cologne is also a popular destination, with its absolutely stunning and majestic gothic Cathedral. Many Germany tours have special Christmas Market itineraries during the holidays that focus on these wonderful events. With tour operator volume buys plus our low everyday prices you can save up to 40% versus assembling the same itinerary on your own! Book your Germany tour today with AffordableTours.com, your discounted tour headquarters. View Germany Tour Deals and Discounts 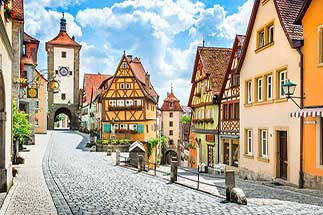 Germany Tours Things To Do

The best time to visit Germany is going to be from the months of May to September. There may be crowds but you'll be enjoying your time so much you won't mind. Caution, it can still be rainy during this time.

Reviews for Germany Tours and Vacations

Our guide Claudia and driver William were excellent and provided a wealth of Alaska knowledge. The trip itinerary and weather was great. Our first leg of travel was by Alaskan Railroad. We had a bonus upgrade to the dome car (totally surprising). The hotel in Denali NP provides a free shuttle so it was convenient. After leaving Denali, we had a very long day of scenic drive to Valdez. Part of that drive was on the road that a rental car was not allowed, so we are glad that we were on a tour. The drive was in a remote area, and there are not many service areas. Our lunch break place had an emergency closure that morning, we had to drive for another 1-2 hours before we found something to eat (suggestions: pack snacks for unexpected events in remote areas). Early next morning we boarded a sight seeing boat (~150 people size). The boat captain provided a narrative tour, pointed out sea life, and stopped by the glacier. It was a wonderful scenic cruise across Prince William Sound.

Thanks to Vince, tour guide, and the driver for making the experience excellent.