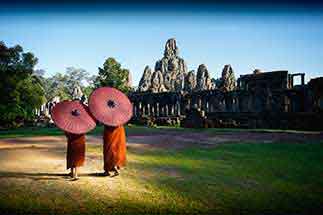 Our Vietnamese tour director is excellent! He's very knowledgeable and keen to his customers needs. He puts everything under control with no complaints especially when an unfavorable incident happened to one couple in our group. He managed it very well. He exceeded beyond my expectations!

This was our first experience with Gate-1 and should say the trip met or exceeded our expectations. The guides/transportation/accommodation/lunch/dinner/local guides met out expectations. Would look forward on taking another trip:-)

The tour guide, from Thailand to end of the trip , was exceptional. He was young energetic , from Vietnam, knowledgeable about history and took great pride in explaining all the historical places we visited. He was very flexible during to tour making sure everyone was comfortable.