Many tours in India include the Ganges River, because of its cultural and religious significance. The stream is considered the holy river of Hinduism. Also, many of the towns and cities you will visit lie along the river. India tours give you a chance to see larger cities, such as New Delhi and Kolkata (formerly Calcutta) as well as smaller destinations, including Kalna, Matiari, or Murshidabad. Agra is another popular site, as it is home to the famed Taj Mahal. Not only can you interact and ride elephants on India tours you can visit sites, such as Mother Teresa's former home, or visit unique places, such as the headquarters for the Hare Krishna religious organization in Kolkata. With tour operator volume buys plus our low everyday prices you can save up to 40% versus assembling the same itinerary on your own! Book your India tour today with AffordableTours.com, your discounted tour headquarters. View India Tour Deals and Discounts 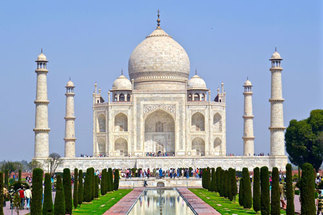