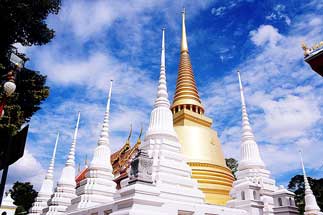 Laem Chabang is a unified Thai kingdom that was established in the mid-14th century. Formally known as Siam, Thailand is the only Southeast Asian country never to have been taken over by a European power. In alliance with Japan during World War II, Thailand became a US ally following the conflict. Controls only land route from Asia to Malaysia and Singapore. Since opening, Laem Chabang has emerged as Thailand's largest, most modern deep-sea shipping port. Laem Chabang Industrial Estate and Export Processing Zone was established in Chonburi Province. With the support of the port, Laem Chabang Industrial Estate serves agriculture-based and other light industries such as electronics, and sports goods shipped in container ships.

Laem Chabang International Country Club has one of the best in Thailand with 27 holes against a immense backdrop and plenty of water and sand hazards to challenge any golf aficionado. Designed by the legendary Jack Nicklaus.